'There's always more': a Moline church gives thousands of pounds of food away to families this Thanksgiving

Grace Bible Fellowship runs a food pantry several days a week. But as we approach the holidays, they opened up their parking lot for a massive giveaway. 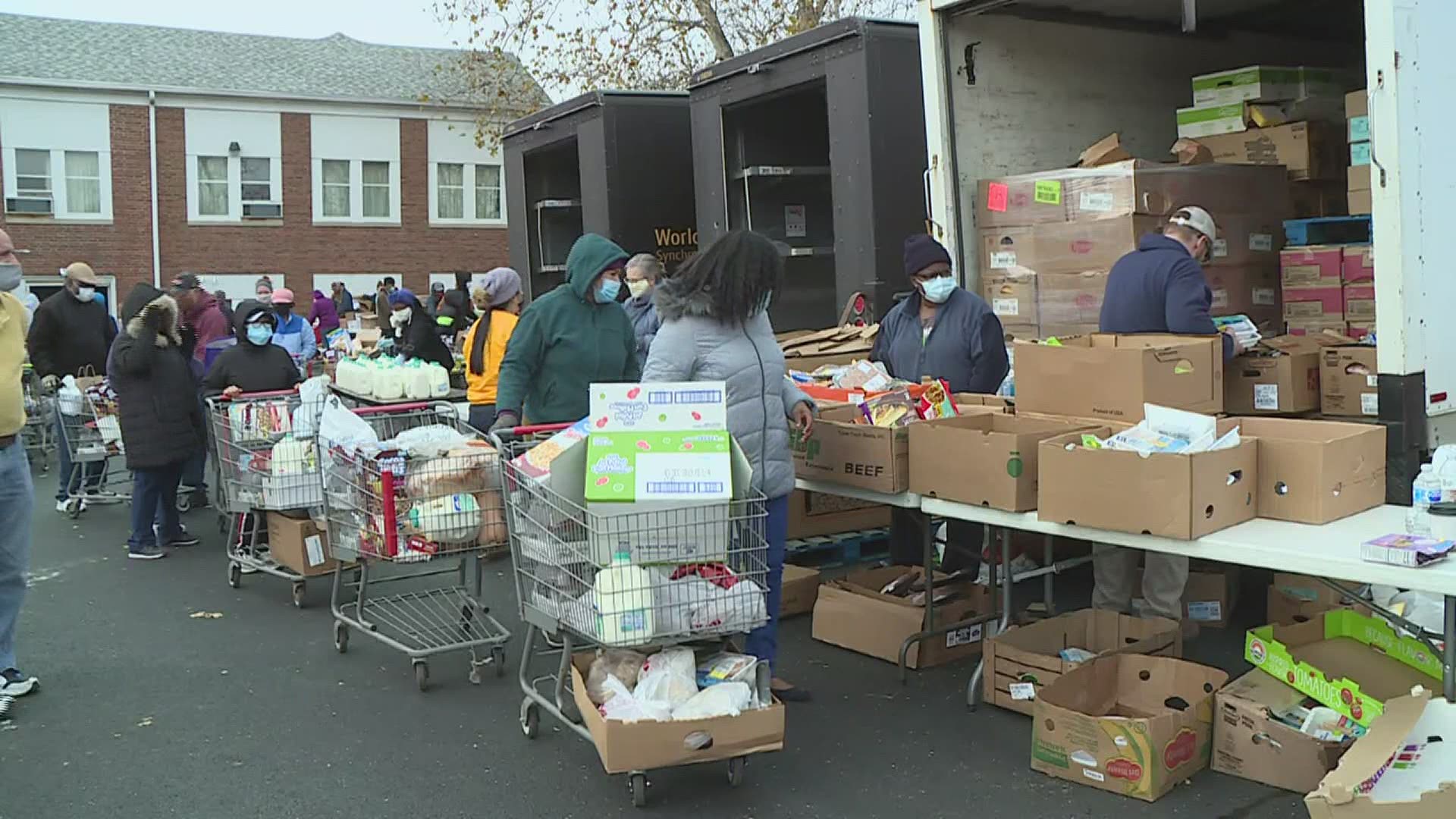 MOLINE, Ill. — Every year, Grace Bible Fellowship gives away thousands of pounds of food, right before the Thanksgiving holiday. This year, they say that work is more important than ever, as so many in the Quad Cities region battle food insecurity brought about by the pandemic.

While the church has a regular food pantry several times a week, they've also had their massive Thanksgiving give-away for nearly three decades. What started out with only 114 turkeys their first year, has now transformed into over 60,000 pounds of food - enough to feed at least 1,000 families.

"It started at 8:30 and people were undoubtedly lining up before that. And it'll go pretty much until it's gone," said Shane Snyder, a volunteer at the food pantry. "People really do rely on this. They do. People are gonna go home with whole carts full of groceries. For some people, that's their whole Thanksgiving meal. You can't place a value on that."

The church set up food stations in their parking lot. Fresh vegetables, meats, juices, proteins, canned goods, cereals, donuts, pies and more were available to anyone who stopped by. UPS also continued their nearly two decade tradition of arriving with trucks loaded up with gallons of milk. No identification was required, and volunteers say they're always instructed to never, ever turn anyone away.

Grace Bible Fellowship estimates around 550 families showed up at this year's Thanksgiving giveaway, representing about 1,500 people. Even with all of that, they say there's still food leftover.

Credit: Shelby Kluver
For hours, crowds line up in the chilly November air to take home a cart of free groceries from Grace Bible Fellowship in Moline.

"It's just gotten bigger every year," said Kelvin Johnson. Along with his wife, he's been attending the annual giveaway for years. This time, he says they arrived around 8:30, and the line was already stretched around the block. By the time they began to load up their groceries, it was nearly 11am.

Johnson, along with all of the volunteers, wasn't surprised about the large crowds gathered at today's event. With the United States well into eight months of the Coronavirus pandemic, many are battling the loss of jobs, finances, and stability. Across the country, that's left thousands of families wondering where their next meal will come from. And here in the Quad Cities, Grace Bible Fellowship says they've seen the increased demand.

"This year's been a trying year for everybody as far as food. We've been trying to weather the storm but you know, it's been rough," said Johnson. "It's been a whole lot on us. But Grace Church has let us know they're here for us and we really appreciate it."

And it takes a whole lot of effort to create an event of this size. From more than 100 volunteers, putting in hours of setting up, distributing, and tearing down, to donation from businesses throughout the Quad Cities, it takes a village to make it all happen.

But at the head of all of that, is the man who leads Grace Bible Fellowship: Pastor Donnie Plemon.

"We're thrilled. It's a great opportunity. We try to glorify Jesus Christ and to help people. That's what we're after. Trying to honor him and do this work. It's a lot of fun," said Plemon.

As the morning went on, he walked throughout the crowd, greeting both those he knew and those he didn't, with equal warmth. He often jumped in to help a volunteer with a task, or with a mother trying to push a loaded-down cart.

"There's Darrin with his truck! And this is Chris up here, and this is Dallas over here. Mike is always up there, and Carrie is the boss," laughed Plemon, pointing out different volunteers to News 8. "We're all close friends and have a lot of enjoyment. I guess that's what I should say, rather than fun. It's joy."

And as the morning progressed, and hundreds of people left with overflowing grocery carts, he marveled at all of the food still left over.

"You can see how much food we still have," he exclaimed. "Look at all this! We've been going since 8 o'clock this morning, and people take out a heaping cartful!"

In a year that's taken so much, from so many; that's left millions across the world with so little, Pastor Donnie says that at Grace Bible, "there's always more."

During the week, the food pantry at Grace Bible Fellowship is open from 8am to 11am, on Tuesdays, Thursdays and Saturdays. They say they'll also have a large giveaway before Christmas.

(Editor’s Note: The original article has been updated to show total numbers from the giveaway)