The group calls themselves "Kids for Vets" and uses their lemonade stands to raise money for veteran families who have lost loved ones. 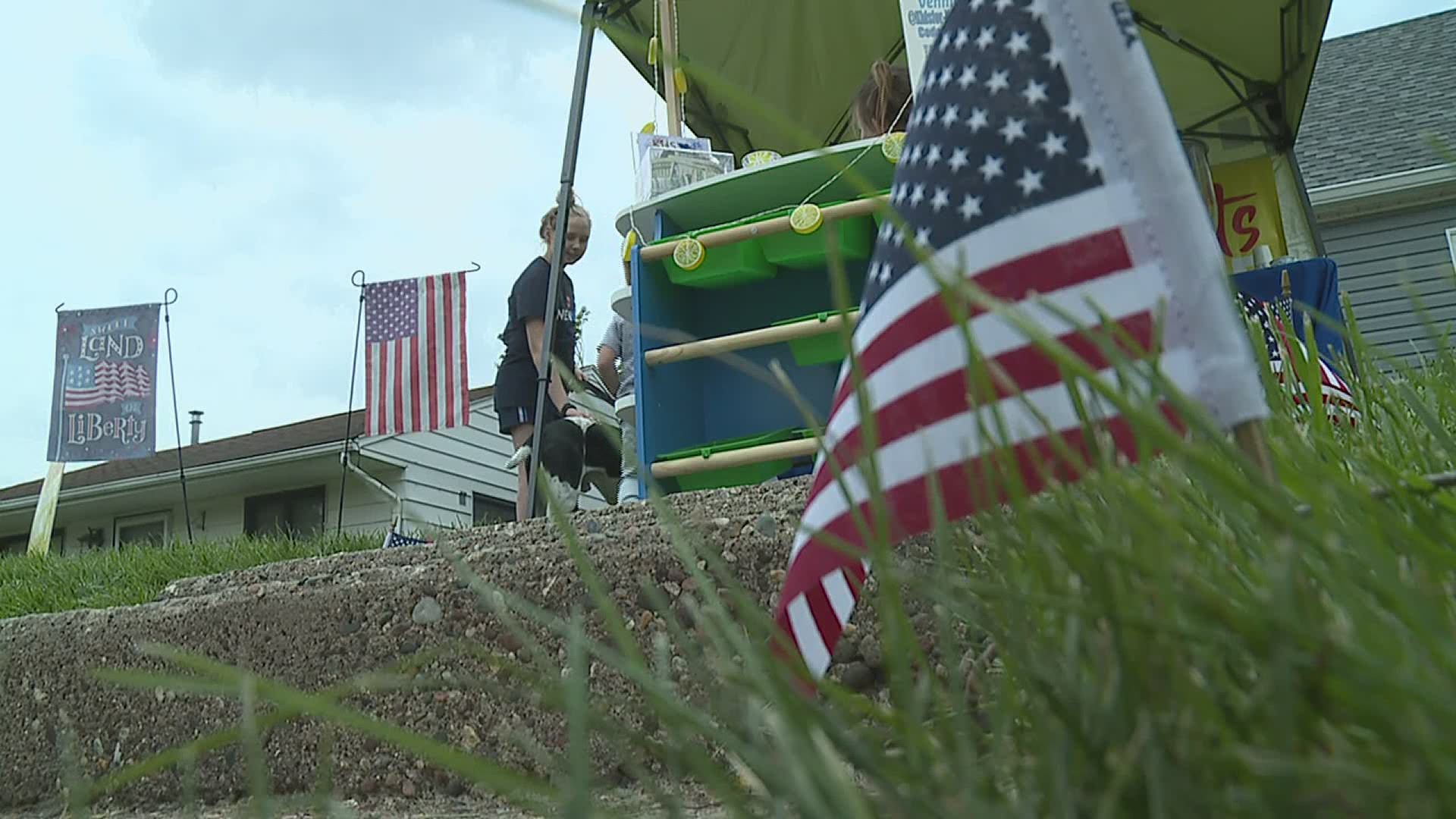 BETTENDORF, Iowa — A group of Bettendorf kids raised $2,773 dollars for veteran families over the Memorial Day weekend... and it all came through their lemonade stand.

They call themselves "Kids For Vets" and they use their stand to raise money for "Thank the Seals," an organization that helps care for veteran families who have lost loved ones.

Last year, siblings Lucas and Annabelle Folland decided to start selling the sweet drink, as a way to get some extra spending money. But after raising $200, their family decided to donate the earnings instead. Now, they've put in countless hours - along with some neighborhood kids and their best friend Eli Smith - all for the cause.

"Last year we made $1,000 in three days, which was awesome. Then we had no idea - because things are open again - what we would make this year, so we had a goal for $2,000," explained Emma Folland, Annabelle and Lucas' mom. "The kids actually picked the charity. We showed them several videos of different organizations and they were the ones that wanted to help the soldiers and the families that were left behind."

'Thank the Seals' was started by a neighbor of the Follands, so they knew their lemonade money would be going directly to the families who needed it. Now, they're trying to raise $10,000 for the charity by the end of the summer.

"We're helping people who lost their mom and dad and they don't have somebody [that's] part of their family right now," said Annabelle. "We're honoring the soldiers who died for us."

Fellow stand-runner Eli Smith agreed, saying, "We ask them if they want lemonade. The money goes to the people who lost their mom and dad in the army."

For the Folland parents, the stand helps teach their children important skills such as business, handling money, speaking to strangers, and thanking people. But they also say it goes so much further than that.

"More important than raising the money is spreading the mission about what soldiers have done for our country," said Emma. "I want to teach our children about that and the importance about that sacrifice because we've been at war ever since [I] was in high school and they don't know any different."

She said putting in 18 hours of work over Memorial Day weekend wasn't easy for some of the groups' 5, 6 and 7-year-olds, but it was so worth it.

RELATED: THIS WEEK: Veterans facing a tough season of COVID-19

"At the end of the day it's all about the kids. Yes the money we raise for the vets is fantastic, but the difference we're making in these kids lives by just getting them involved... that's really what it's about," said DJ Folland.

If you missed the Memorial Day sale, you can always donate online to Kids For Vets. They have a venmo (@Kidsfor-VetsTTS, code 0303); Cash App ($KidsforVetsTTS); and PayPal (KidsforVetsTTS@gmail.com). Or you can visit their Facebook.

And if you want to host your own lemonade stand for Thank the Seals, Kids For Vets can help with that as well. You can click here for their online contact form, and then they can send you all the supplies for your stand (minus the lemonade) and pick it back up, if you're within a 30 mile radius of the Quad Cities.

Here is the update!! The kids are so excited to get more friends involved! We have a link here to have parents sign up...