The Johnson family is touching residents at senior living homes through their art project, and they're getting to know their neighbors along the way. 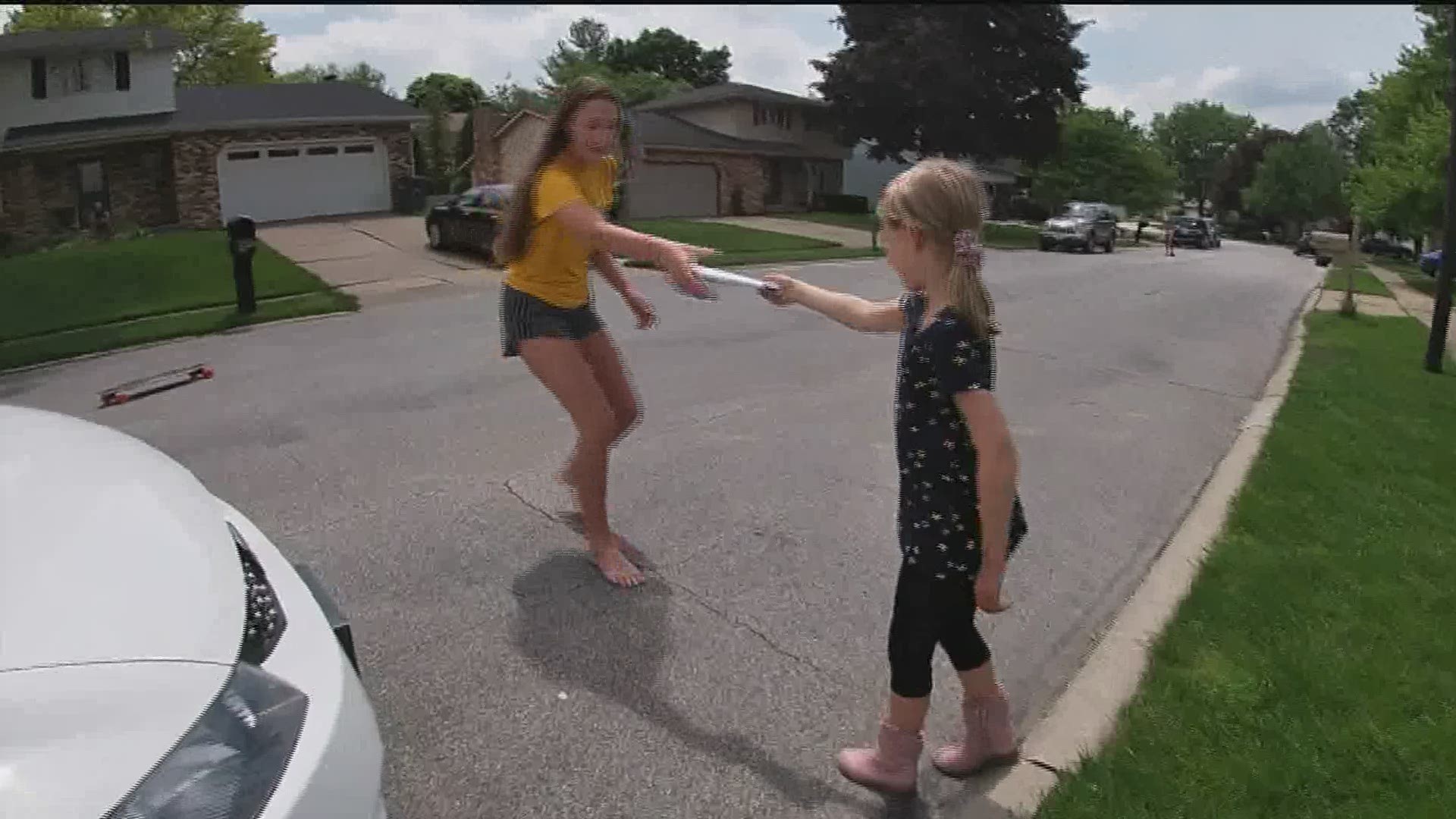 BETTENDORF, Iowa — When the pandemic began to set in, Bettendorf mom of five Anne Johnson found herself in a rough patch.

"As we know, middle of March was a pretty depressing time. It was a very uncertain time.," she said.

"With things shutting down, school shutting down, the ability to have play dates, there was more of a sense of things getting taken away from them," she said, referring to her children, from Emily, her oldest at 17, to Paige, Sophie, Evelyn, and Caleb, the youngest at three years old.

She remembers lying awake at night, looking for a sense of purpose, for herself and her kids, and just a reason to get out of the house.

She remembered an older friend, living at The Fountains, a senior living facility, and the idea came to her to do something for those most isolated.

Seniors, with their higher risk exposure to COVID-19, and especially those living in communal homes, have been facing greater isolation as many centers have drastically limited visitors in order to keep the virus from spreading to their residents.

Johnson started with her just her kids coloring pages for seniors, and she thought maybe some neighbors would particpate.

"It started out with something small, it became something really needed and big," she said.

Several times a week, she and her three youngest children cram into the family van, and head to a different neighborhood in Bettendorf.

Each message, neatly rolled up and bound with a ribbon, contains a letter, and two coloring sheets.

"Hello neighbors!" the letter reads. "During this difficult time we are hoping to reach the many elderly shut-ins who are being affected."

The letter goes on to describe seniors "isolated in their rooms," and "extremely lonely."

The letter ends with a request for a simple expression from the heart, and instructions on how to deliver the finished artwork.

Johnson said she originally intended it as an outreach to younger kids, but found that many adults would send in their colorings. And they colored outside the lines and personalized their messages to the elderly.

"People have included pictures of their dogs. We’ve even had a person who wrote poetry, a woman who wrote different scriptures that meant a lot to her. And my favorite was when someone wrote down, if you need a penpal, here's my address," she recounted.

"I would pick up the art from them, or they could come to our house, drop it in this box. We would laminate the art, just for a little bit extra cleanliness."

Whenever she collects 20 or 30 pieces, she makes a trip to The Fountains. When her initial goal of 150 pieces was met with 179, she began to reach out to a senior center across the river, in Illinois.

Her aunt Mabel used to live at Heritage Woods in Moline. "As a tribute to her," Johnson said, "We drove across the bridge and delivered to Heritage Woods."

On Wednesday afternoon, she was back at The Fountains. The nearly 200 residents living here have not been able to receive visitors since the pandemic broke out.

Lifestyles Director of The Fountains, Katie Searl, has been keeping residents in good spirits with Zoom calls, Facetime chats, and window visits with their families. She said the pieces of arts have not just eased residents' isolation.

"The residents love it, especially the ones that say 'You are loved,' or 'We are thinking of you.' Everybody needs that, not just because you’re 95 and you’re in senior living, but the staff needs it here as well." she said.

Staff are managing the extraordinary challenge, and have so far been successful in keeping residents safe, she said.

"Checking on us, it just kind of reassures us that people are still thinking about us. We’re doing everything we can to keep people living here and working here safe."

Staff have hung the art all around the common areas, so everyone can see. She said residents proudly tell their families about it.

"Art it touches a nerve with people," Johnson said. "It’s beautiful and it’s personal. And that’s what’s missing during this time, is the ability to reach out to people, and feeling like you literally can’t touch people, and this was a way to touch," she said as she went around The Fountains, looking at windows adorned with the familiar pieces.

Coloring is therapeutic, she said. And even though with all the organizing she's been doing to keep the Art from the Heart project going, she hasn't found the time to color herself, the project has helped her and her family find a way to connect and make life colorful again.

"There were some days where I didn’t want to get out of bed. But if I know that this was was ahead of us that day, then that would get me out of bed, because I knew there was a joy to the kids, and it was a joy to me. I got to see faces from afar."

The Johnson family found a way to serve while social distancing, and they say they will continue to do so much longer.

"Just as things are opening up, in our world, the people that are younger," she said, "In their world, it’s not opening up."

Visit the Art from the Heart page to participate and make art to lift others.