Starr, Valor I and Valor II have delighted the internet with their multi-eagle approach to parenting. But the August storm made many fans wonder if they were okay. 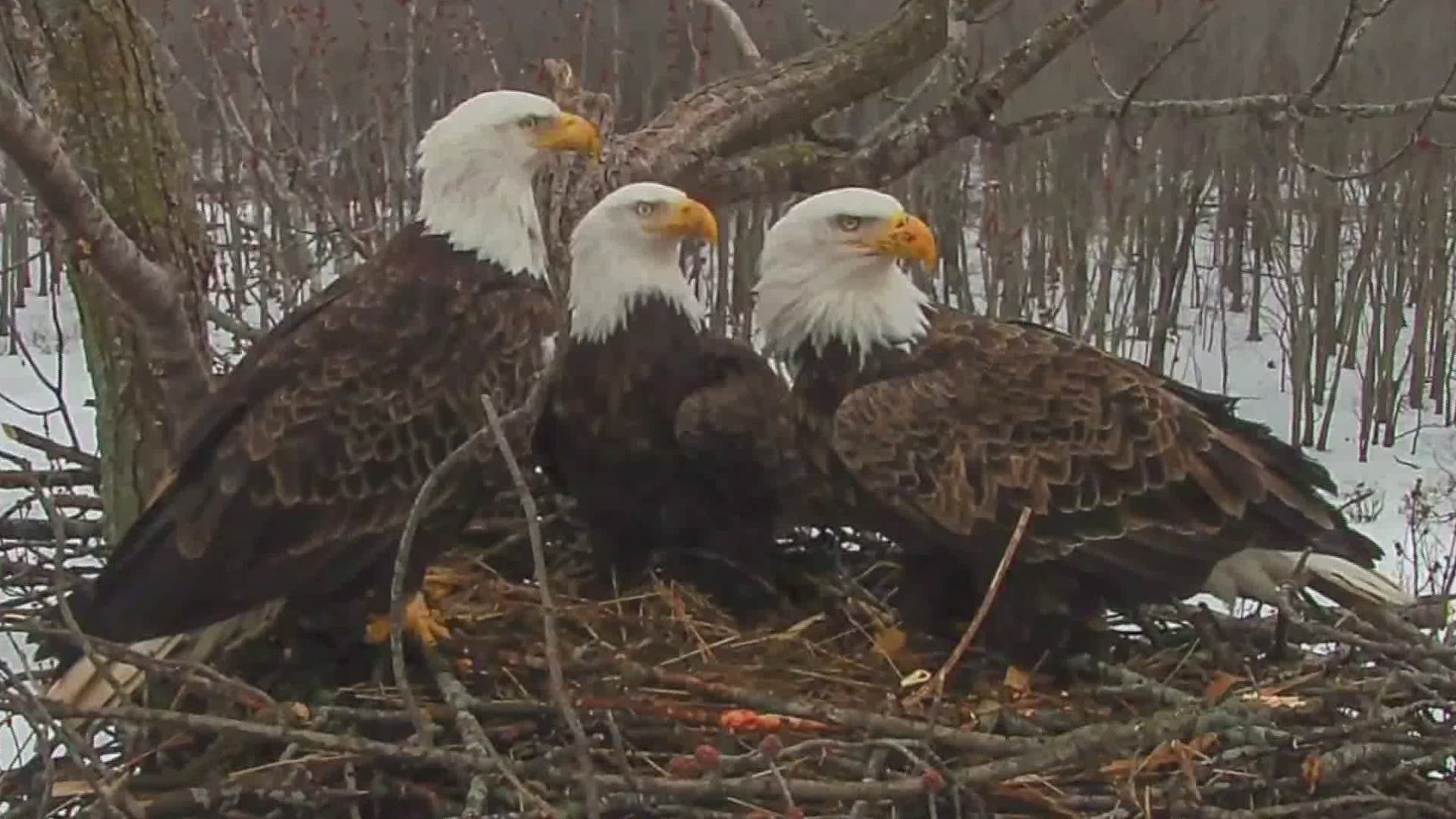 FULTON, Ill. — For years, the bald eagle trio of Starr, Valor I and Valor II, have delighted thousands from across the world. It's one of the few documented cases of an eagle trio living together as mates and raising eaglets together.

Earlier this spring, we brought you the story of how these three birds first began their unusual triangle - including jealous lovers, tragic nighttime attacks, and stunning survival demonstrations from several babies, as well as the death of the original female Eagle, Hope, and the surprise introduction of Starr.

They've been tracked by the Upper Mississippi Wildlife and Fish Refuge area since 2004, and living near Lock and Dam 13 for many of those.

The birds grew to worldwide fame after a nest cam was installed a few years ago. It streamed 24/7 on YouTube, allowing eagle-eyed fans to witness all the bickering, babies and beautiful moments for themselves.

According to Ed Britton, Distract Manager for the Upper Mississippi Wildlife and Fish Refuge, it's grown to fans from more than 70 countries tuning in.

"It's a very interesting wildlife story that we never envisioned we'd be able to document," he said.

Posted by Stewards of the Upper Mississippi River Refuge on Friday, May 1, 2020

A large part of that documentation is thanks to the Stewards of the Upper Mississippi River Refuge, who helped put up and maintain the eagle cam over the years.

Larry and Bonnie Thoren have run the eagles' social media pages during that time, and personally respond to many of the fans. To them, having a camera so closely located to such a unique phenomenon, was priceless.

"It's an incredible nest," said Larry Thoren. "It's a cooperative nest, and it's two males and a female. It's very intriguing to watch them, and watch mother nature in action. We're very privileged to watch them mate, build nests, lay eggs and raise their young."

The Thorens described her as an eagle-trio-superfan. DeCoursey said she couldn't really argue with that characterization.

"The interactions between the eagles is why I watch," she explained. "It puts you into their world. If there was no eagle cams, we'd have to be on the sidelines with binoculars somewhere."

DeCoursey was recovering from a knee replacement a few years ago, and shut inside her house: unable to go anywhere and looking for a release. That's when she found the trio's camera. In hindsight, she joked about how many more people might be feeling the exact same way today, in the era of Covid-19.

She quickly became immersed in the comradery between fellow cam-watchers, and learned to identify the different personality quirks of each bird.

In August, when the derecho swept through parts of Iowa and Illinois, it meant lots of bad news for the over 300 eagle nests in the Upper Mississippi Refuge.

"We lost thousands of trees during that storm," said Britton.

And the trio's nest was also lost.

The tree supporting their home was twelve feet wide at the base, but had a shallow root system due to its proximity to the river. When the winds ripped through, the branch holding the massive, ten-foot-by-ten-foot nest toppled to the ground; along with the camera bringing thousands into the eagles' world. The damage so great, that even remnants of the nest are no longer discernable on the ground below the tree today.

"It was a very large nest and we were always concerned about wind damage," said Thoren. "Naturally we were disappointed, but we knew it was inevitable."

Fortunately, the nest fell during the eagles' off-season: when the babies had already hatched and flown away from the nest. But for many viewers and long-time fans, there were worries that the eagles wouldn't return for the next season.

"That would have been heartbreaking for a lot of folks," said Britton.

But it turns out the trio wasn't ready to say goodbye to their home near Lock and Dam 13 just yet. About a week after the storm, loyal locals had been out looking for the birds, when the spotted them: all three eagles, still together, and creating a new nest within the same area of their previous one.

"They're native residents and they didn't want to go very far," laughed Britton. "We were jumping up and down, releasing balloons and celebrating! It's incredible that we continue to watch this adventure. This totally awesome adventure that we never expected."

Both the refuge and the stewards say the plan is to let the eagles live out this season in privacy. The location of the new nest is being kept secret, and they ask that excited fans don't go looking for it.

"You need to stay more than two football fields away so you don't scare the eagles or interfere with them before they're done rebuilding," Thoren explained. "When the timing is right, we have a volunteer tree climber who climbs up the 85 feet to assess if a camera can go up."

He says as long as no one spooks away the birds, and that the new tree they're in can hold and sustain a new camera, there is a possibility that fans could be let back into the trio's world as soon as fall of 2021.

"I think most people understand, we don't want to take the chance of having them abandoning it," said Britton.

DeCoursey says while it is difficult to wait so long to catch a glimpse of some of her favorite birds, it's worth it. She remarked that other fans need to remember to just 'trust the eagles.'

"Let em' do what eagles do. Yes there's gonna be losses, yes we're gonna be sad, but life goes on."