After more than a century at St. Mary's in Davenport, the historic organ was played for a final concert - a merger, forcing the church to close. 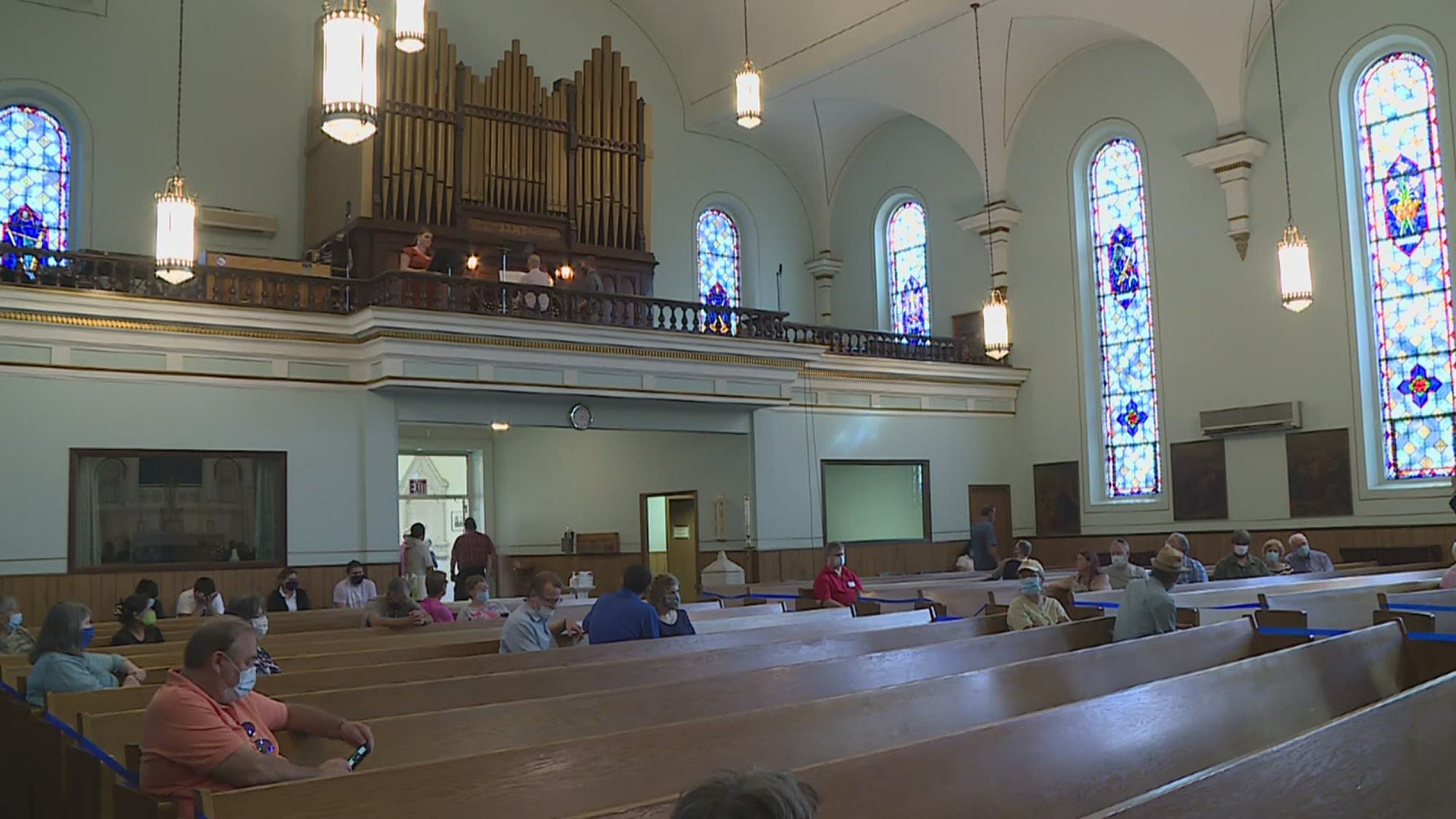 DAVENPORT, Iowa — For more than a century, she's towered over the choir balcony of St. Mary's Catholic Church in Davenport, as the oldest pipe organ in the Quad Cities. Known as "The Voice of St. Mary's," the organ was given one final concert, in her home church, on Saturday, Oct. 10. An emotional farewell, after generations of music within those walls.

The organ stands 26 feet tall, and boasts nearly 1,000 pipes. It was installed before electricity was hooked up in the church. She was built in Moline, in 1883, for St. Mary's, and has played for countless weddings, funerals, confirmations, celebrations, Easters, Christmases, memorials and thousands of masses.

But now, she's played her final concert, in the church she was built for, nearly a century ago.

A merger within the diocese has closed St. Mary's doors - moving some of the parish to St. Anthony's and some to Holy Family - and leaving the building for sale.

And leaving the old pipe organ to look for a new home.

The church is currently looking for someone to take her in, as well as raising fifty to sixty thousand dollars to help pay for the cost to dismantle and move her. A few restorations will need to be done, to replace the century-old wooden parts inside of the organ, but as Lars Anderson will tell you, her pipes are still as good as the day they were installed.

Anderson is on the farewell committee that came together to say goodbye to both St. Mary's and the organ. He's been living in Los Angeles for the last 40 years, but he remembers growing up three blocks away from the church. He learned how to sing in the choir loft, accompanied by the old organ. When he heard about the merger, he knew he had to come back.

"I just couldn't walk away without hearing- I just had to hear her again," he said.

When the church decided on a farewell concert, they knew they needed to find a talented organist to send the instrument off.

"It's very complicated to play an organ," said Anderson. "Two entire sets of 16-foot pipes can only be played from the foot peddles." He explained that for nearly two decades, those pipes hadn't been played on the organ.

So when Chris Nelson, Director of Music at St. Paul Lutheran Church in Davenport, was called in to play for the concert, he knew it was going to take a bit to coax out the sound.

"Each organ has its own personality," said Nelson. "This one, I find to be very mellow."

Nelson described the honor of being asked to play the concert, and the joy of discovering the different sounds, colors and voices that could be brought out of the pipes.

"It's a beautiful instrument," he remarked. "I think it has many years left in it."

Father Rudolph T. Juarez agreed, noting that the organ has a history unto itself - providing countless generations with music. He's the pastor at St. Anthony's, and says it's been difficult to watch so many people say goodbye to the church building.

"There's always sadness in goodbyes," he said. "But all that is important. We grow attached to certain places throughout these special occasions in our life. It's natural that people would want to hold onto that. But all things have to change."

The concert was a chance for generations of St. Mary's parishioners to come back and reminisce. Dozens gathered both inside the church, and on the lawn, listening through speakers. As the organ played sounds of Bach, Schubert, Bernstein and George Shearing, old friends laughed and chatted.

"I saw so many friends from grade school! Some brought class pictures and pointed out, 'Oh, there you are!' It was wonderful," laughed Anderson. "Growing up here, you went to church and school with your neighborhood and best friends. Their parents knew your parents. Your families all knew each other."

In between the three acts of the concert, local dancers performed out on the lawn, and a pledge drive was held for the organ's moving costs. Anderson estimates by the end of the day, the fund sits around $16,000.

But the real star, was the organ.

"She sounded so beautiful. Even just the soft sweetness of it has a power that touches your heart, and then when it opens out and opens up, it just... it made me feel like a little child again," said Anderson, tearing up. "The physical vibration of the sound in the air makes a connection with your body."

Claire Kuttler is a professional opera singer originally from Davenport. She normally lives and works in New York (when she's not touring the country), but she said the pandemic forced her home for a few months.

Kuttler had never sung in St. Mary's before, but when she was asked to join the goodbye celebration, she said she couldn't say no.

Her rendition of "Ave Maria," in particular, brought the audience to their feet. It's an old favorite of St. Mary's. And as Kuttler's swelling belt faded from the air, more than a few people wiped away tears.

And for one concert-goer, the tears just couldn't be stopped.

"This is it. This is the organ of organs," said Carol Harris Leingang. "When I come here and hear that I think of walking into a big cathedral in Italy or Rome."

Harris Leingang grew up at St. Mary's as well. She was baptized at the church, as well as all five of her eventual children. To her, this concert was a bittersweet homecoming.

Her mother was one of the many beloved organists to play for Sunday masses, holidays and celebrations - even playing the organ for a young Lars Anderson when he was learning how to sing. When Harris Leingang was young, she remembers going up into the choir loft and pulling out the stops for her mother, or turning the pages.

"Hide behind it was a favorite thing to do," she laughed.

Now, her mother is gone. And her and her sisters would always come back to the church on the anniversary of her passing. Often times, sitting in the same pew they would always sit in with their grandparents and mother.

"It brings back a lot of memories," said Harris Leingang. "It's just really hard to imagine it not being here. It's sad for me. It's very sad. We're gonna miss it."

And as the final notes of the concert rang out - the last the old organ will ever play, in the church she was built for, over a century ago - Harris Leingang was seated with her sisters, in the same pew as always.

The vibrations in the air were quickly drown out by thunderous applause, but the sound from the pipes, bouncing off the old church arches and stained glass windows, will not quickly be forgotten.

No matter where the organ ends up, it's already changed countless lives.

As Harris Leingang puts, it, "it just has a sound like no other sound."

The final mass at St. Mary's will take place at 4pm on Sunday, Oct 11. The road will be blocked off and a socially distanced service will be held in the street. The organ will play for the service, one final time.

If you'd like to donate to the fund to preserve and protect "The Voice of St. Mary's," so that it can be properly dismantled and moved to its future home, you can contact St. Anthony's by phone (563-322-3303), or by email (davstanthony@diodav.org).